Annoyance, that's how I feel today. Have you ever feel annoyed or irritated for no freakin' reason? Like just because, you are annoyed? Weird eh? That's how I felt. I know it's not a good reason to be annoyed with anyone but I am. I am so fuckin' geram*.


And now I'm irritated by people...and being irritated is annoying. Annoyance.

I love Kuching*...and I love my kucing*. They are the love of my days (although the can be very annoying!). Imagine when you give them food, 8 kitties (big, medium, and small ones) keep rubbing themselves on your legs. Very uncomfy but so cute you know ^_^. Yesterday my sister was giving them their dinner and called out to the mama cat, she ran after her...and behind the mama cat was 6 other kitties following the mama cat and my sister. It was the funnies thing ever...and so creepy. :P

I just gotta do a post about kitties!! I think I have a lot more than I can handle (like seriously, but they are so freakin' cute it's hard to resist!!). I'll try to introduce you with my kitty cats :). Just beware of the hypnotizing eyes of the lil 'innocent' kitties. Originally, we only had 1 car, ONE cat. He's my sister's cat. His name is Angelo. He is a (grey) Persian. Then my dad (who all of the sudden became so 'kitty-cat-crazy') bought another kitty, a female one who is a Himalayan-Persian (she has a flatter nose than Angelo) we named Valentine or V for short. They were cute lil cats. UNTIL, they had babies!!! Freakin' cute babies!!! 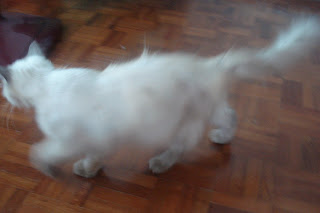 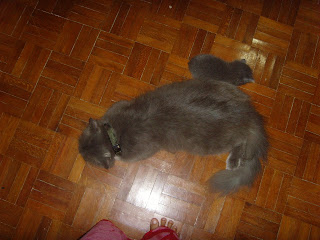 This is Angelo, with lil Oreo
The first litter died, all 6 kittens. It was sad, but thankfully I wasn't around when they were born. Then they had their second litter, 2 cute kitties!! We named them Simba (cause when she was a kitten, yes a SHE, my dad says her head is so big it looked like Simba from The Lion King). But her head is not so big anymore :P. And the other one Ollie (no comment there ^_^). 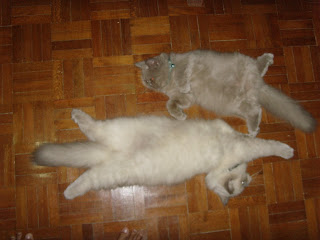 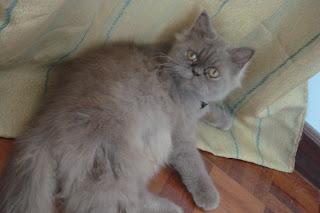 See I told you her head is not that big anymore... 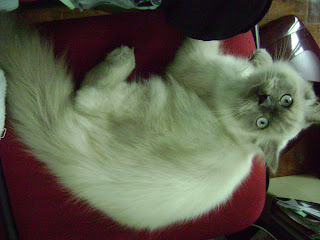 Ollie looking at me with his big, round, grey eyes. He wants a tummy rubbb...

Well it doesn't just end there, she decided to have more babies (I suppose part of it is not V's fault). The latest edition to the kitty cats' family are just a-d-o-r-a-b-l-e!! I'll just show you some pictures I took of them. 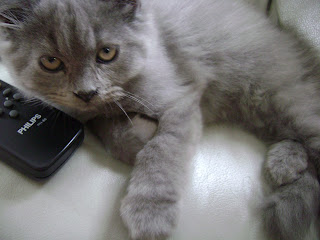 This is Oreo. She is anti-social and the only dark one in the litter. I think she's anti-social just like Angelo. She is the only one that kinda looks normal with not a puffy fur coat and she also looks like a normal cat. 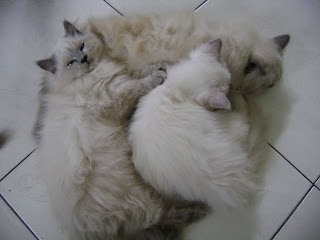 And these are the other 3 lil tykes. Ain't they just a cute furry furball??!?!?! The one that's being slept on is Boone, he's the furriest and biggest of them all. He reminds me of Ollie when he was a lil baby kitty ^_^, so cute!! And he loves to pick stuff up and carry it away. I think he just hates to share :P. The one on the right (the only white one in the litter) is called Bunny or baby, she answer to both names. She loves to follow you around. She'd just prance on her paws and find a spot to sit. She is kinda lazy. :P And the one looking at the camera is Charlie. He is adorable. And he and Oreo loves to take pictures. See the picture below. 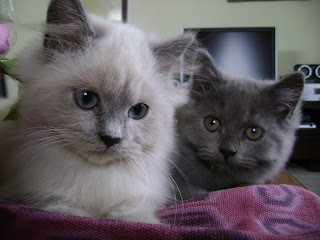 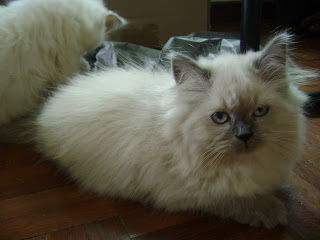 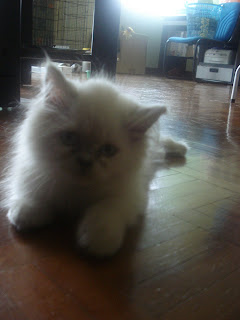 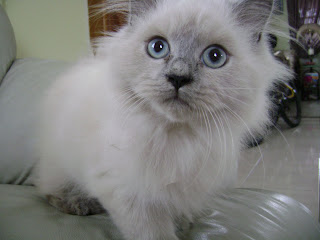 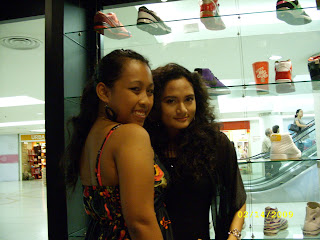 I have been occupied for the last month or so ;). I had a fun VALENTINE weekend. Although it was a sad ending to my 5-week-date but it was fun. Got to spend it with happy-crazy-fun people and the people I heart so much which was great. Everyday was a great but this was super great ^_^. But anyways, the day started pretty early, aroung 9am. That's when I set my alarm anyway and as always I woke up before it rang (it's the internal alarm that goes "WAKE UP! WAKE UP! It's late!") Like seriously sometimes it's annoying :P. So what have I been doing every morning (for almost 5 weeks) wake CLK up from slumber. Thankfully he's a light sleeper (although he said he needs to be roughly awaken cause he won't get up) although I think he's a pretty light sleeper cause he'd wake up with a gentle knock :D. Yes me knocking on his door...ehehe.

Ok, we were suppose to have lunch with my sis (one of my closest friend, Ms Scandalous) and her 'scandle'. She has been talking about him for some time and I was really excited to meet him. Like seriously, very excited ^_^ cause by the was she described him he was fun. And I was right!! He gave me a very bright vibe when I first met him. Very stylish fella (D you are the funniest!). So anyway I tried to get ready before 12pm, but thankfully they were running late >:). So as it was Valentine's day (S don't celebrate it, I've never celebrate it but it was kinda special so we called it Funeral day) I sassed it up a bit. Nothing much, I don't know how to dress it up. But it wasn't a big deal anyway. And I thought that it was gonna be crowded (hence Valentine's day) but it was pretty slow and calm. I wore this black satin-maxi dress with orange flower (that CLK bought for me...didn't take a pic of the dress), round wooden earrings that we bought at the Main Bazaar, and wooden bangles (2 for RM10). Nothing special anyway..but just wanted to look good. ^_^

So as they showed up, (and wanted to use the loo :P) we decided to go to The Spring. Well it was not the best place to be having lunch but we make do anyway. We just wanted to have a good time :). It was pretty crowded at The Spring (like as always) and we decided to have our 'double date' lunch at The Sushi King. Why? I don't know, we feel like sushi time. :) There was a crowd of people at Sushi King but it was not as crowded as I've seen it. No long lines outside, but pretty full. We tried to get a seat near the runaway-sushi-conveyor but we didn't get a good enough seat. So D was complaining (and CLK was too) that we didn't get a variaty of sushi going our way, which was true. But never the less, good sushi time (and very full stomach). 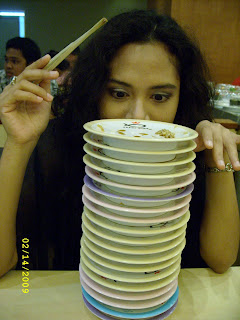 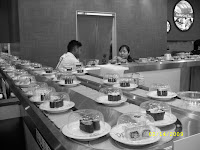 **Sushi running away from us**
And of course, we did what we looovvvveeeeeee to do, cam-whoring!! We had like 2 cameras (mine's and CLK's) so we took as many snaps as possible without everyone thinking we were being too vain. And D and S were perfect models. Too bad we couldn't have different poses, since it was crowded and well go figure. 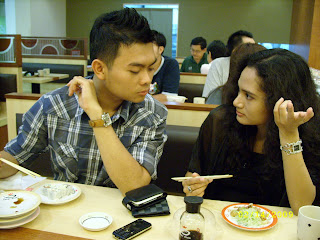 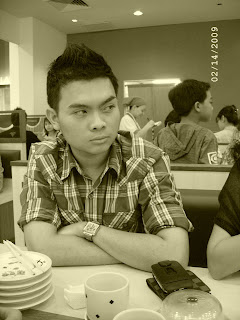 **D with his pose...he was saving his stomach for some ABC** 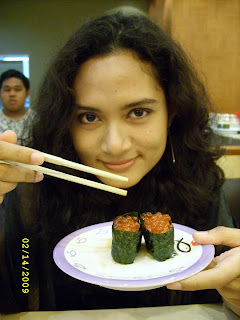 **S with her sushi that she didn't want to have but had anyway :P** 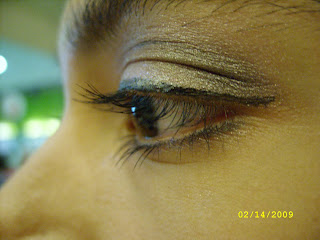 **Oh did I mention S's fantabulous makeup, and the lush lashes (I forgot what product it was but amazing)** 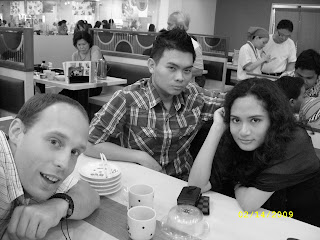 **Being the photographer I was cut out of the pic..but it turned out pretty good** 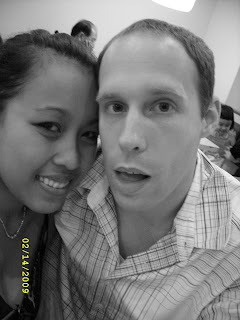 **And we, had fun, typical CLK pose v(^_^)v**
We took a lot of pictures that day, I don't think I can upload cause it takes so long. Anyway, we got a below par service that day. The workers was probably too busy with other customers that we weren't offered green tea, so Daszz took a pitcher of it. Yeah that was a lot better than waiting for people to pour us some tea :D.

So after a good meal of sushi, we went to BOON KHAI for some well deserved Malaysian style dessert. We had ABC's and got some gossips. After we were sitting there, we saw this group of people coming. We, as crazy as we are, probably laughed our ass out, at this one aunty (sorry aunty it was just that funny :P). I can't even begin to describe how she was dressed but not very pleasing to the eyes. But you can't really judge people, maybe it looked good to her...ahaha, was funny tho. She had this bee-hive-of-a-hair, and was wearing sheer short pink top (seethru but gladly she was wearing something else under that) that D says looks like Queen Elizabeth (missing the collar). 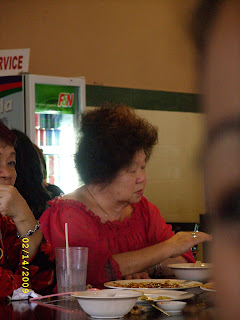 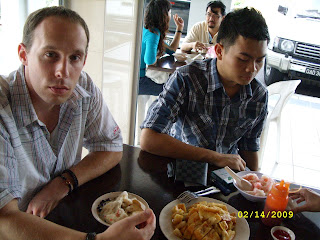 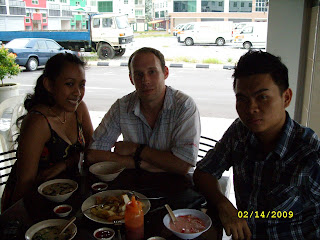 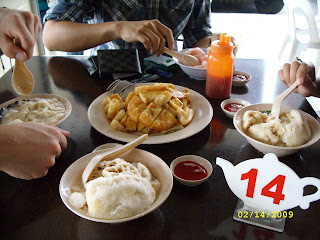 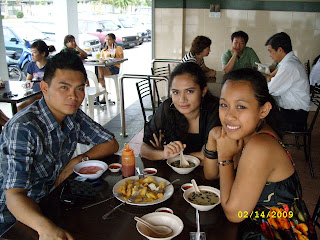 .
.
.
.
.
.
.
.
.
.
.
.
.
.
.
.
After the wonderful lunch and dessert, we head home (CLK and I) before we head out for dinner. :) I got one last surprise for the night. Since he was leaving the next day (15th - really shouldn't let anyone leave you after V day or a public holiday..cause it totally sucks) he bought me a diamond ring *surprised*. It got me tearing up cause I was sad and happy at the same time. And a lil pink rose, that was just a spur of a moment thing. :D Which he said was 'dead' which is true. Next time get me a pot of roses :P. 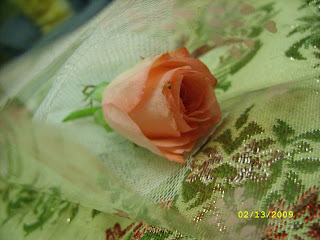 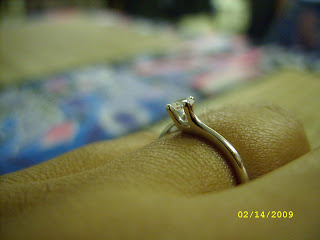 Overall I had a great weekend...although a lil sad but it was worth every minute. And yes more updates to come. Just too much to write...So tired.

~ Music Box: Take a bow - Leona Lewis, Christina Milian -Us against the world, Craig David - Unbelievable ~
Posted by a!k0 at 2:16 AM 9 comments: Links to this post