This is one of my favorite love song. I wanted this to be our song but I think I must find another one. This one is associated with something that is pretty funny. XD


Every time our eyes meet
This feeling inside me
Is almost more than I can take
Baby when you touch me
I can feel how much you love me
And it just blows me away
I've never been this close to anyone or anything
I can hear your thoughts
I can see your dreams ...

Last night was the 3rd round of the Capitol One cup (I think it was the Carling cup before?) and Arsenal played at home against Coventry City. I knew it was going to be a good game but I was really pissed that they didn't play it live on tv. Come on Astro!

Anyway I was happy that Arshavin get to start and Chamakh was on the bench. A lot of the players that played in the game was not the usual first 11 players and I was excited to watch Martinez, Yennaris and Miquel on the pitch. I hope I get to watch the replay. They freakin' won 6-1!

Olivier Giroud finally scored his 1st goal on his 7th appearance for the club. I was so excited about this. :D He has been trying to score and finally got it. I hope this bring him luck in the games to come. Alex 'The-Ox' scored an awesome goal too after Giroud missed the penalty. As I predicted Arshavin gets his first goal this season, Miquel added one and Walcott scored 2 to make up 6 for Arsenal. Overall I am happy with the score line. Coventry got a consolation goal in the 78' minute.

The fourth round is set to be played end of October where Arsenal will meet Reading. I hope they will do as good as they did in the 3rd round. The good news is Manchester United will have to meet Chelsea. So one less team to worry about! :D
Posted by a!k0 at 12:29 AM No comments: Links to this post

So this is what I found when I went to the Google website :D

Or as CLK calls it 'GoOn' LOL. So I remember when FRIENDS was the bomb and then FRIENDS ended and my life became a dim light bulb. So when Matt le Blanc came back with Episodes I was so excited and hoped it was somewhat as good and funny as FRIENDS but I was somewhat disappointed. When I was browsing through tv.com website and saw Matthew Perry has a show coming up I thought 'Well maybe Matthew Perry could be a lot funnier that Matt, I mean we all love Chandler Bing.' And I was right!

Matthew Perry's new show 'Go On' is pretty funny. Might not be as funny as FRIENDS but pretty close. His character in that show is named Ryan but whenever I watch that show it always reminded me of Chandler. Seriously. Even CLK agreed with me. XD

There are a few new shows I was looking forward to watching this time of year but Go On wasn't one of them. I am so glad I did because I am loving it! I hope this show survives the year and gets a second season like Community. :) If you haven't watched this you should. I dare ya. ;) Have a great Monday!
Posted by a!k0 at 8:45 AM 2 comments: Links to this post

Okay so football season have started like a month or something but they have only played 5 games + 1 UEFA Champions League game so it's still in the beginning stages. :D (Yes I am talking about Europe football or as some may know as soccer.) If it is still not clear I am an Arsenal supporter and always will be :D (Unless they all move to Barcelona and they start to suck maybe I might change my mind :P)

via
This is the latest standing I could find so far: 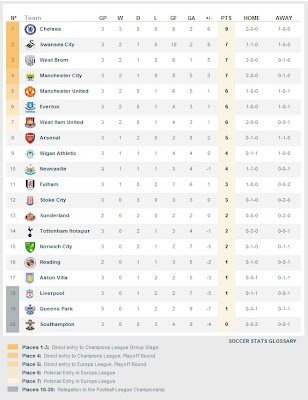 After the Sunday games, Manchester United goes to 2nd and Arsenal goes to 5th with Manchester City to 7th. They are only separated by goal difference. Thanks to the Arsenal v Southampton game last week which ended with a 6 - 1 win. They are currently still unbeaten with 2 wins and 3 draws. Today's game is kinda important cause they are playing against last season winner. And most of Manchester City's players are ex-Gunners. Booo~~~! :P

Since they have lost Robin Van Persie and Alex Song at the start of the season, Arsenal gained 3 valuable players: Lukas Podolski, Santi Cazorla and Olivier Giroud. The partnership between Cazorla and Podolski is pretty awesome so far and looked like they have played together for years. I hope they can bring some magic to the Emirates this season. I think this could be one of the best teams they have since the Fab4 (Fabregas, Hleb, Flamini, & Rosicky). I hope they play Marouane Chamakh and Andrey Arshavin this season. I miss watching them play.

Labels: Arsenal, Arsenal.com, football, football starts, random, soccer, what I did this weekend

Playlist Friday: Daniel Bedingfield - If you're not the one

When I was in school there was a guy that I had a total crush on. Okay I must tell ya, he was not the most good looking guy on campus nor was he the hottest guy but I don't know why I had such a crush on him. My bff at the time knew about it and we would stalk him (yes! literally stalk him!! LOL). We were on the same faculty and out faculty was pretty small and at that time our campus was just starting to come together so there was no other students around, which was kinda sad cause I would totally go flirtin' around other guys from other faculties (I heard the mechanical engineering students were pretty cute!). Okay to make the story short he knew I was stalking him and his friends knew and he would sometimes smile at me. OMG! my heard would go crazy!! HAHAHA thinking about it now I feel kinda dumb. LOL.

So anyway I would listen to this song over and over again. HAHA like a love sick puppy (ok it WASN'T love obviously) but it was embarrassing when some of my housemates knew about it. :P It makes a fun story though. I think I liked him A LOT because he was tall...very tall. I think he was about 6'1". One of my guy bff would often tell me he was over 6' too and I am not swooning over him. Haha...we'll I love my bff :) he is amazing and keeps calling me 'shorty' cause I am obviously shorter than him. Hah!

But anyway enough of the silly stories. I hope you enjoy the song! Definitely is a sad love song I think. But I still love it!

p.s. Oh we never went out or anything. Which was not so bad. Did chatted with him online a couple times. Kinda turned me off. HAHAHAHA.
Posted by a!k0 at 8:39 AM No comments: Links to this post

Happy Friday everyone! Seems like Friday comes and goes and comes again!! Crazy huh?! So how was your week??!!

This week I want to share one of the first song from Natasha Bedingfield that I love. :D I think it really is a pick up song :) if you are feeling down, definitely listen to this song. :)


What other Natasha Bedingfield do you love? I think her songs are pretty catchy. :D Have a wonderful weekend!
Posted by a!k0 at 8:15 AM 4 comments: Links to this post

TV Date: What I am looking forward to

Hey everyone, how is your week going? I wish it was fall where I am since it's been pretty hot and humid here. :) A few things I love about fall are the cooler weather, the changing leaves and the start of shows. :D i am a tv junkie so this is a pretty exciting and crazy time for me.

So last season I was excited to wait for the new season of Once upon a time and Person of Interest to start up again and it is almost here! This is what I found out on tv.com. So what shows are you looking forward to?

Hey y'all...how's your Sunday goin'? I heard that football season has started?! Mine started about 4 weeks ago :D (talkin' about soccer!). So go (insert your favorite football team here) !! So anyway since CLK supports Green Bay Packers, I say go Packers!! XD hahaha. My dad does too..well that is largely because we lived in Wisconsin for a couple of years and you technically support the local teams (although my dad liked the Chicago Bulls a lot - when they were famous back then). Although I am glad CLK isn't a total football head (not a fanatic- *phew) so missing football isn't such a big deal. I am a crazy Arsenal fan though...I am not a crazy fanatic either but if you wanna talk football (aka soccer) I can talk for hours!!

Anyway enough about football. I don't know a lot about it to save my life :P or hair. Haha...I was just here on Sunday cause I have been MIA for a long time! I have a few pictures to share. My sister have flown back to India a few days back and I miss her a lot. We didn't take a whole lot of photos but we must when she comes back for my sister's wedding in December. She was sad because they lost her luggage and hoping that they find it a.s.a.p.

Random picture we did one night :) This took a really long time to do! But we love how it turned out! Haha...If you are wondering how we did it, this is from an app on iPad/ iPhone. :D

What are you guys doing this fine Sunday?
Posted by a!k0 at 8:59 AM No comments: Links to this post

Happy Friday everyone!! Have you check Google homepage today? It's a tribute to Star Trek. I would post it if I could but head on over to clickety click on the Google icon. So this week I started to work harder for my dance class because I need to tone my upper arm more and my abs. I know I need a lot of time and patience.

I try to practice the shimmy but I could only do it a few minutes rather than 10. One of my favorite song to shimmy to is Republica - Ready to go. It works much better than doing the shimmy with an actual belly dancing music. :P I think it's the sound of the drum and the beat that makes it a lot more awesome.


Do you have a favorite song by Republica? I only know two of their songs and they are both very catchy. Hope you are enjoying your Friday and weekend! Any new tunes you are listening to recently?

p.s Just in case you can't watch the video try listening to the remake version of the same song. I (like most) love the original version better :)

Mojo...sleeping with my sister. XD Tweeted this before my nap.