Ok, I have been doing a lot of useful (and not so useful :P stuff) lately. Like for Christmas I manage to baked cookies for my friend (tart and this other cookie we call Mama Carrie ^_^...) yummy I must say. 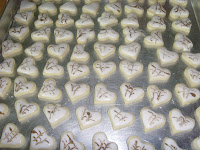 This is the mama carrie that I made...It looks pale but it is really good... :D 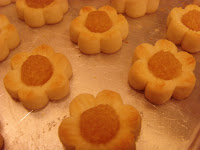 Tada.... This is my tart (pineapple tart) me and my sister baked. ^_^ I can say I'm very proud of myself...and well since it is Christmas, I know people have ginger bread man cookies, and I decided to make one tart man cookie :P ahahaha. See, he is adorable and yummy indeed. ^_^ 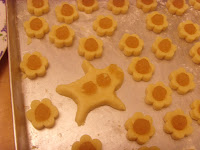 Ahahaha...ok my sister says his eyes are buldging too much and it looks like a star, but sooo? It's my cookie :D. And it got burned a lil...ahaha. My sister and I made chicken pie with the left over dough. I didn't want to make too many tarts so we made chicken pie!!! It was yummy and everyone wanted it. We finished baking at 1230am!! I know crazy, then I got a bad backache in the morning. This is the chicken pie my sister made. :D 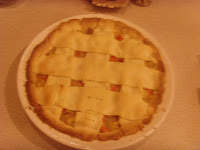 Ok, on the other note, my dad brought us out for dinner..hmm, a few nights ago. And we went to Top Spot. It a place where people sell food. Well duh! :P Ok I'm not very good at describing things...OMG!!! I use to be a pro. Ok, it's a place where there are stalls where people sell food, and there are place where you sit, order and enjoy your food...............yummmmmmmmmmmmmmmmmmmmmmmmmmmmmm... ^_^. I have some pictures I will upload...the internet is giving me a f****ng bad time. So it's really, really pissing me at the moment. :( Oh, and I manage to take a picture of this guy (ok CLK says he looks Australian but I dunno the difference :P. Ok maybe I do, but who cares. ;) And the more I try to take a pic of him the more it turn out to be bad. Hehehe...I know I can't think of anything better to do while eating. ^_^ 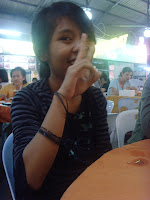 Ok, the guy on the right of the picture (the one in blue, the Australian looking dude :P) 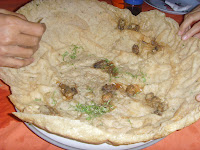 This was the oyster thingy we ate...I don't really know the name of the dish. They say it's egg...thingy. :D But it was good. And it is a lil salty tho, it comes with a soy sauce based dip (that was salty >.<). 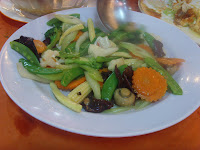 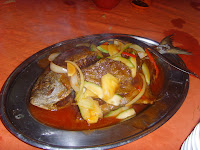 This dish is a fish dish cooked sweet and sour style. I don't know what's the fish name is in English, but it is called 'bawal itam' in Malay. :D 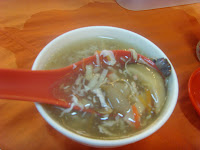 And this one is my brother's favorite. It is sea cucumber soup. It has a different taste everytime I go there and eat. Sometimes it's sour, but it is yummy tho. :D


This are some of the dishes we ordered (ok my brother ordered them cause he knows them by heart). It was good, maybe we go there a lot so it is not "WOW" :P but it's good enough for me. :D

Another thing that I did before Christmas week was driving (not me, my uncle drove ^_~) to Serikin. :D It is the border of Sarawak and Indonesia. And we went shopping!!! Bought a lot of stuff, but not anything ORIGINAL, mind you. But who cares, it is still CHEAP!!! Some of the thins I bought were: 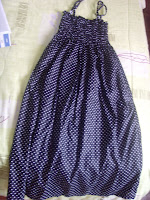 1. Knee length spotted black dress. This dress I found when I was on my way back to the car. And I am so glad I found it. And it was in the rain, this one is a new one that old guy got me. It is soft and black (with white spots). It is cute. ^_^ I bought it for RM28. 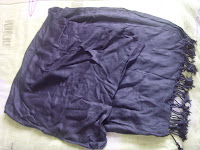 2. Black pashmina. I have been looking for a black shawl/pashmina and I found this for RM11. It is soft and black (duh! :P) And I am happy. :D 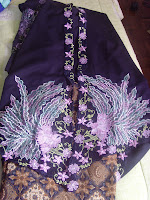 3. Black kebaya with pretty peacock design ^_^. I so freakin' love this kebaya!! Ok, it is not a kebaya yet but I will make it into a kebaya! And there is always one stall that sell this design! And this one the LAST ONE that was sold. I am so glad that I found it. The original color I wanted was of a RED peacock but the one I found was PINK but it's ok. :) It was still worth it. The tapih* isn't the one that comes originally with the top. I had to change it cause the original one was BRIGHT PINK. The red one I saw was blackish-with red color. :( I wanted that one, but I suppose I should be satisfied with this one. 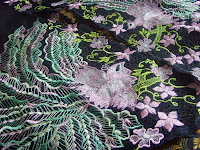 If you have Facebook, then you know that there are millions (literally), millions of applications that comes with it...OMFG! I can't handle it all...so when people sends stuff it takes me forever to go thru them all...sorry (: I don't want to ignore them, so I let them just sit there, collecting dust! :P Ok, maybe not collecting dust but you get the point. Now, I think I have about 3000 invites. And I don't want to ignore cause when they send me them, they have moi on their mind. Thank you friends. :D

There is this particular application, Hatchlings, that I didn't really bother at first. Then it just became mad. MAD I tell ya!! Cause everyone is so crazy about finding these eggs. And the creatures that comes out of it, it's just freakin' ADORABLE!!! :D Yes now I am addicted to it. And I add people just for that sake!! :D We help each other out so its good. I am satisfied. ;) It is very addictive....I can't get enought of it!!! And we all are looking for special eggs that comes out during holiday seasons.... Facebook is a real bad addiction!!!

Ok I'm kinda pissy right now, and yes 'unfortunately' it is that time of the month, but I'm pissy for a different reason. *sigh* The day started good, emmm, I suppose not so good cause Chelsea won the game last night (ok kidding

) but anyway, it got worse and then I got this fu**ing message from this 'guy'. Gosh it is so freakin' irritating, and annoying and so disrespectful. I feel so violated and harrassed!

I feel like killing that poor bastard and stabbing his eyes once, twice....until I can't stab anymore. Gees, that makes me soooooo freakin' angry.

Stupid idiot! What do you think I'm that freakin' cheap??!?! EXCUSE MOI! Doesn't mean I show off a lil flesh means I'm a freakin' wh**e. And no I don't do it so you can go goo-goo gaa-gaa over me... Ewwwww...that's so fu**kin' gross. FYI we dress up so we can feel good about ourself, and just because we can. Don't make assumptions about why we do and what we want. Go lick yourself...

And today was suppose to be a relaxing wednesday, and I got another dress, green color, which I have been looking forward to. (Dress tally so far 3 new ones

, thanks Al!). And it was ruined by a stupid email...gosh can people just grow up? I feel so violated and why oh why do some 'guys' (some not all...I have found guys who are very mature and very nice to hang out with) have to be so immature?? And gross, and very sick minded, very everything la... Ish, fu**in' a**hole.

On a different note, I went to Bookcastle yesterday (Tuesday) and bought books!!! Yes I heart books, always :P. I spent at least RM58 yesterday on books and I bought 7 books!!! (: I'm a happy woman. I bought 4 books by this auther, Nora Roberts. I have never read any of her books before but they sound interesting (and they were covered in plastic, possibly new ones too :P) so I got them and I hope they are just as good as the others. The 3 books that I bought was a trilogy and since all was there so what the heck, and one book entitled Birthright. I also found 2 books by one of my fave author, Catherine Coulter...she always makes me stay awake pass my bedtime and her stories are always interesting. Also, I found a book about Mary Tudor, one of the daughters of King Henry VIII of England. Coincidently, I was watching the movie 'The other Boleyn Girl' the morning I went to the bookstore. So I had to get that one, it always intruiges me. I have started reading that, and of course it's like reading history :P. And I also wanted to get the VC Andrews books too, but I had too many books I couldn't carry them to the counter. >:) There was one new series I found, Melody. So I am hoping the other books appear soon. So I can snatch them away...ahahaha. I have nothing against new books, but I want to get them at a cheaper price...so what, I'm a cheap skate *pffffffftttttt*. I am tired, but I need to start my work again...yosh!!!! I know I can, I know I can, I know I can!!

I have been gone for sooo long....