Piece of the week: Is on vacation

I. Hate. !@#%^(&*#$%@. The internet connection has been uberly slow and annoying to me this past few days...and I need fast, lag-free connection dammit! I can't even load my Facebook page! OK, that's very important you know.

So since I can't get on YouTube this week POW would have to go on a slight vacation. Will find a badass piece for all....

That is how much time is spent laughing our ass off - and crying till my chest hurts - talking and laughing at other people, laughing at stories,about other people that are hilarious and cursing at people who we find effin' annoying. Ok, we don't always laugh at other people, we just sometimes have stories (about ourselves) that we laugh about. No harm done. :) 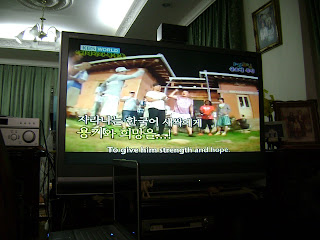 Like seriously, absofuckinglutely funny!!! x 1000! We (Fi and I) was over at Juls' for the open house and we had to, had to stay and watched 2 days 1 night...together! Like for the very first (possibly last) time. And we laughed. Like. Crazy. XD and it was like after midnight ^^. It was funny! Hilarious! You gotta watch it to believe it (oh it is in Korean but we 'understood' ;) ). 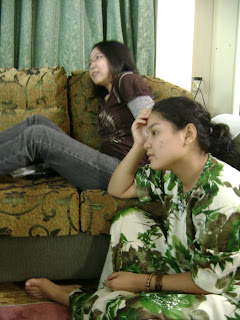 It was one of the good days of Raya. Hmmm...actually waited for CLK to get on but he didn't and well I was kinda pissed a lil. Cause at least he would say HI. You know...ok, I am just a lil clingy...I am not saying I am not! I am CLINGY. He knows I am clingy. Take it or leave it.

So yeah I was kinda !@#^&%* and then my parents says "hey, we are going to take a family portrait today". OK yay? And we actually had fun. It was not like super duper fun but we had fun. We got home and well...took more pictures, as usual. Me and the sisters and my brother trying to be civilized.

Until I realized I was suppose to go see Juls (she actually reminded me XD thanks Juls!! I had fun!). Then Fi and I went. We were expecting everyone to be dressed - as in in Raya clothes and stuff - but they were in jeans. JEANS. Gah if I knew :P I wouldn't be so dressed up. Hahaha, Fi and I were dressed to impressed but it was ok. It is still raya :P.

We got back at around 2am, not before we went to my aunt's house. She was here for a few days only and I wanted to say hi before she leaves. Nicky, my cousin gave us his own concoction of a 'mocktail' - Sundrop orange juice with Cola- it was surprisingly good. :D My aunt didn't want us to get poisoned by it but I am still good. And kicking :P. So, THANKS Nicky!! 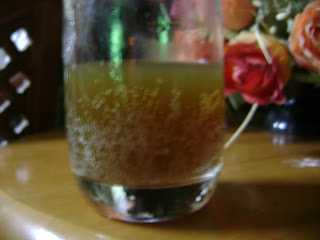 It was like a small (family?) gathering but I was nervous. I was embarrassed to wear something so 'glam' when they were casual. :P We ate good food, always good food with KFC. I know, out of all the food KFC you say :D but I was craving for KFC so...it was goooooooooooooooooooood. ^^ yummm yummm.

We were introduced to Glee and Vampire Diaries. And they were interesting. They are not out on tv or anything here but they are out in the states. Time to look it up and drown ourselves in more vampire episodes - and Glee. :D They are really good. I am going to follow.

So today (Sunday), I had some fun too. :) With some friends, old friends. High school friends. :) I miss high school friends. We had spaghetti! It was good. And cheesecake. They were. Awesome. My friend's husband is a lucky guy! ^^ Too much food...and an hour ago, I had some steamboat thingy. =_='' I know...so much food today... but it is still Raya. ;) That is always a good excuse. :D

Piece of the week: Symphony no 47 in G major

Ok, as we all know it was a holiday weekend, which means....holiday, no rest, food, staying up most of the night, food, friends, family and laughter. Yeah fun...then I remember I forgot this week POW...hmmm. I guess I wasn't in a rush to post this up since I have not been going to my orchestra practice...for almost 2 weeks now. :P Didn't I said it was a holiday week? :D And no I have not done my ASSignment yet...typical.

Anywhoo, this week piece was on of the last pieces I played before the holiday. It wasn't one of the 'greatest' or interesting piece I've played but I like it. :) G major sounds really good ^^. So this week I present Symphony no 47 in G major by F. J. Haydn.

What has been going on? 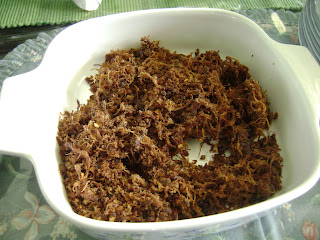 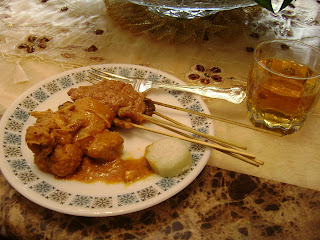 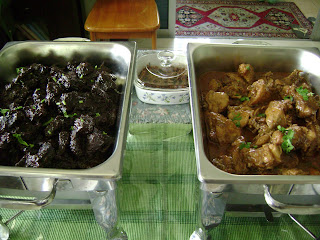 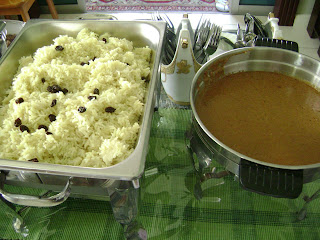 Now I don't need words for that right? Gonna indulge in chocolate cheese cake...hmmmm... (and that my friend is how I got my migraine yesterday).

I just wanna wish everyone Selamat Hari Raya (Happy Eid) to everyone. :) It is gonna be a good week (hopefully!!) and I am, hoping that I will be busy! Busy visiting friends, going to friends houses and eating yummy food! Isn't that great??!?!

I am so gonna post pictures after pictures and more pictures!! I hope I won't be too busy (or not busy, that would be not good). Oh I have a presentation due the Monday after this coming Monday. :P

Come to my house and eat some yummy food!!

Piece of the week: Air on G string

So this week, I only went for my orchestra practice once (ok it was last week, since I am doing this like a whole 5 days late) and we were playing (mostly) the G string pieces, or majors...whatever. Anyway, they were getting ready to play for a wedding (booo, we didn't get to play in it since they only want like 5 people!! how stingy!) and the pieces were romantic and great.

This was one of my many favorites of that night, and I tried so hard to remember the names of the pieces (even had to write them on my phone, just in case) and this particular piece is so familiar yet I never could find the exact title for it. NOW I know. :D This lovely piece is by Bach. :)

It is a romantic piece, good for those long walks down the isle or a romantic dance with your partner (now that makes me wanna dance) altho it also reminds me of the castle, knights and kings and queens. :) So I leave you with Air on G string by Bach.

I sometimes feel like rambling about nothing-ness but when I come here...to spill my ill thoughts random ramblings, I go numb. Like, hmmmrrmmm what was it that I was annoyed at? Yes, exactly. I have no effin' idea.

Today I was just feeling kinda at peace with myself, wait maybe not. I don't really know how to express the feeling, but I'm not sad nor am I happy. It's like being stuck in the middle. At peace? With myself? I dunno...but people have been asking me, constantly about when will CLK and I meet again. I suppose the idea of him not being here really puts me down. Like don't rub it in the face man, I know he's like half way across the world you don't need to remind me of that fact - kinda feeling. You know...

It has been about 7 months this 15th of September that I last saw him, like see him, feel him kinda see. *sigh* I talk to him almost daily but it is not the same. I mean we didn't want to be put in this exact situation but it just happened. I guess there are some good that comes with it but like what is good if you are apart right? I dunno...I mean it is good, but the distance really is bull. But that's what we choose, we decided, we took and accepted. :) And I am happy. (Ok didn't I say it puts me down?)

I dunno, I guess some people can't see how it could work, having a loooooooooooooong distance relationship and all, and being apart for so long. The way I see it, is that if you have no desire to be with someone else, or attracted to anyone else it would work, right? And I do believe in karma. I mean, if the other person was cheating on you you are sure to know about it one way or another. Karma's a bitch I know. Altho I am hoping karma would be good to me this time :). I mean what have I done to be bitten on the ass right?

Anyway, I was just rambling...actually there was a point to this but like I said I forgot as soon as I see the 'new post' segment. Life's a chocolate factory...haha. Hmmm, chocolate.

Piece of the week: The planets Op. 32 Jupiter

:D I love planets. This week piece is a piece that I somewhat hate love, I guess I have a love-hate relationship with it. Undoubtedly it is a very good piece. :) Or maybe it's the conductor my lack of side reading skills...but listen to it. It is really good.


So I give you The Planets Op. 32 Jupiter by Gustav Holst

Seriously, I think I have Monday blues. :( I just realized the my drivers license expires tomorrow and I can't go and renew it!!!! I have an 8 am class (I think, I'm not sure!!) I am so screwed! And I just spent !@*(!#$**# amount of money sending a parcel to CLK today. Like I knew it was gonna be much but not THAT much. You hear? *sigh*


I have been on retail therapy lately, and I need a therapy to get out of that therapy. I NEED A GOOD BOOK! Seriously. Lately I'm obsessed with something....and my kitties are leaving me soon. :( I'm so sad!!! Like really. They are the cutesttttt of the cutest. I'll post pictures soon, I need to catch some zzzz. Night.
Posted by a!k0 at 9:20 AM 2 comments: Links to this post

Piece of the week: Greensleeves

This piece was our soundtrack favorite growing up. (Al, this piece is close to heart ain't it?) This is an 18th century piece by Mozart, altho I think it is relatively short and I wish it was longer. It reminded me of the King Arthur era, where all are white and gay (gay as in happy, joyous, celebratorious (is that a word?)). And it is so never-ending-story theme. :) You know what I mean. ;)


So this week I present to you Greensleeves by Mozart.


** The first clip is the piece we usually play with the orchestra, and I thought was the original one, or maybe not...I don't know but the second one so reminds me of King Arthur. Dang I want to watch The Tudors.