So in a few hours we will see who is going for glory...at least 3rd place. Since Paul have had death threats lately (and I was convinced by someone that they will not harm, or eat Paul...hopefully) I am really scared for the octopus. Although I think all of this is just a mere coincidence...right? Come on, he is just an octopus...:) Or so it seems. I never really care for octopus before, they give me the squeamish feeling...you know.

Anywhooo...so this morning it would be Germany vs Uruguay...honestly I would like to see Uruguay wins it. No offence Germans fans, it's not like every 4 years Uruguay makes it to the semis...and they could actually make it to the finals too. Next time for sure!!!

I am needing some sleep...I should get some shut eye now!!! Will update later~~


~~~ UPDATE ~~~
Well we all know who won that 3rd place game. Germany. I am glad they won it. They deserve it but I think Uruguay deserve it too. They played really good...and no I didn't get to watch it. Sleepy eyes...unable to open it but I saw the replay. Real nice. Too bad we can't have 4 winners...or it wouldn't call it a winner eh? :)
Man of the match for that game was Thomas Mueller. :) I think that guy plays great football and too bad he wasn't available to play during the Spain v Germany match. I think they might have a chance to win the game. Then again if they did win, we wouldn't be crowing the new champion of the world tonight (for me as I am watching the final game as I write this). 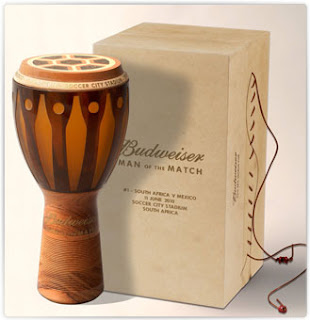 www.fifa.com
The man of the match trophy is one of the most unique I have seen so far...then again I never really pay any attention to that stuff. I am going to vote for the man of the match this final game. I deserve the right :D. Oooo can't wait. Am going to watch the game now. Will see who will be champion of the world...soon.
Posted by a!k0 at 9:46 AM